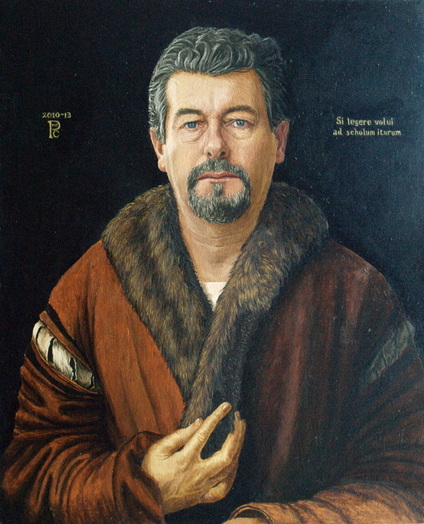 Self Portrait 2010-13 Title; Si Legere Volui, ad Scholum Iturum
(Latin: If I wanted to Read, I'd Go to School)
Paul was born in Dublin, Ireland in 1961and continues to live and work there. He grew up in Finglas, a suburb on the city's north side, which was an amazing laboratory of adventure for an enquiring mind. Just 200 meters from his council house family home, began the fields and hedgerows of North County Dublin where he climbed trees, dammed ditches and observed nature. Finglas fed his curiosity for all things scientific, including physics, zoology and anthropology.
Paul had his first solo exhibition in Saint Andrew's Lane Theatre in 1991. This was followed by Refrigerate After Opening in 1997 at the School Yard Theatre in Charleville County Cork and was the first show in which subject of food and consumption would become a continuous theme with his work.

​In 2002 The Daffodil Gallery, Skerries, hosted 'A Brick a Week', a collection of paintings that documented the DIY holiday homes of North County Dublin, in places like Portrane, Donabate and Rush. Most of them have now fallen into ruin.
As a mature student MacCormaic graduated from UCD, having read History of Art and then went on to Dún Laoghaire Institute of Art, Design and Technology (IADT) graduating in 2006.
Since graduating, he has been a full-time artist and part-time teacher of painting classes in NCAD and Art History in local schools.
Awards and Achievements
2001, First prize at the Oireachtas Exhibition, Town Hall, Dún Laoghaire.
2004, Arts Council Travel Award
2006, First Prize painting, Catalyst Student Awards, Belfast
Purchases by Meath County Council, Louth County Council, UCD and IADT.
Short-listed for the Golden Fleece Award 2012 and the Zurich Portrait Prize, 2019. 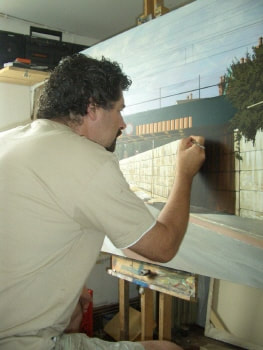 Left, myself painting away in my tiny studio. The picture is 'Howth Junction' (sold)
Powered by